FOR WHICH I AM PREPARED TO DIE​ 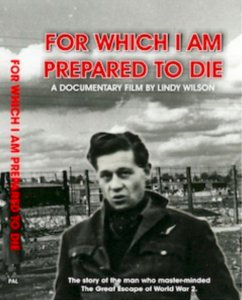 Squadron-Leader Roger Bushell master-minded the “Great Escape” of World War 2, about which a famous feature film was made in 1963. This documentary explores the life of Bushell, its script taken largely from his own words in letters home during his captivity.  Bushell was a London barrister, an auxiliary pilot and a champion skier when he was shot-down early on in the war. His dare-devil personality did not succumb to captivity and he escaped three times: once, to within 100 yards of the Swiss border, the second time to Prague where he was hidden by the Czech Resistance for six months.

He was then betrayed and, suspected of being a spy involved in the assassination of Nazi Protector Reinhard Heydrich, he was taken to Berlin and severely interrogated by the Gestapo. In spite of their threat to shoot him if he ever escaped again, Bushell immediately accepted the role of “Big X” on his return to Stalag Luft 111, a top-security German camp. He encouraged others never to give up the hope of freedom for which he was prepared to die. After 18 months of preparation, one of the greatest escapes of WW2 took place: 76 men tunneled under the wire without being detected. Their aim to distract the enemy succeeded as it was estimated that 5 million Germans were deployed to re-capture them. But Hitler’s rage was uncontainable. He personally ordered a terrible reckoning. Intense and gripping, the film is both a thriller and a tragedy. 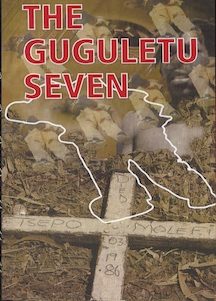 On March 3, 1986, seven young men are killed in an ambush by police in the suburb of Guguletu, Cape Town. Police pleaded that they were ‘terrorists’ and were so heavily-armed that arrest was impossible, They say that they had no option but to kill them all. A witness, however, sees a man shot with his hands up in the act of surrendering. This fact led to the extraordinary unravelling of the real truth ten years later by investigators of the Truth & Reconciliation Commission. The journey of this film is as gripping and shocking as any detective story – and unfolds in that genre. The event distils a period when South Africa was chillingly close to a major civil war. Its universal message reveals with shocking reality what happens when power corrupts political systems and assassinates its opponents.
Date: 2000, Length: 107 mins 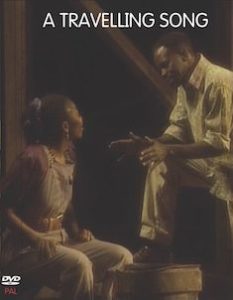 The past is A TRAVELLING SONG which cannot easily be suppressed or silenced. It travels with us and shapes our future. For South Africans to create a new ‘song’ after endless years of oppression much is needed to be re-interpreted re-discovered and re-born. Two actors, GCINA MHLOPE and PATRICK SHAI, meet on the stage-set of Athol Fugard’s PLAYLAND, and consider this task. They perform and improvise on the stage but soon realise that the theatre is too confined a space for the stories they seek and that they are bound to go outside. Patrick goes two kilometres underground to meet the men who continue to dig gold in mines worked for 100 years and Gcina meets their wives. All of this will make a very unusual, very different documentary film. Indeed, they realise they will have to make several films. In fact, they will need a whole new TV channel.
Date: 1993, Length: 54mins

This film has been used as a teaching tool all over the world in countries where new economic scenarios are being debated as governments change. It was made in South Africa in 1992 just after the release of political prisoners (1990) and before the first democratic election (1994), when the African National Congress came to power. A group of economists, political scientists, business executives and trade-unionists, (one now Minister of Finance and the other Head of the Reserve Bank) met over several week-ends at a place called Mont Fleur to debate what possible economic and political scenarios the country might follow in the future. Semi-animated drawings, done by South Africa’s most famous cartoonist Jonathan Shapiro, are accompanied by insightful analysis and real documentary footage to encapsulate four scenarios, told in metaphorical language :

1. An Ostrich , which simply buries its head against change;
2. A Lame Duck, which tries to fly too far too fast, carrying too much baggage from the past;
3. Icarus, who flies too close to the sun by opting for indiscriminate macro-economic populism and falls to his death;
4. The Flamingoes, the chosen scenario which, by means of democratic consultation, take off jointly in large numbers and fly to new and rich feeding grounds!
Date: 1992, Length: 28mins

The story of the creation of a unique community health centre, ITHUSENG is told by its remarkable creator, Dr. Mamphela Ramphele, who was banished there by the ‘apartheid’ government because of her role in the Black Consciousness Movement and her association with its leader, Steve Biko. At ITHUSENG she transformed the lives of poor people into a cohesive health and community-run venture which was an example to the world. Ramphele later became Vice-Chancellor of the Univ. of Cape Town, a Deputy Director of the World Bank, is an author of several books and a key voice in the new South Africa.
Date: 1984, Length: 35mins

Made before Nelson Mandela’s release and South Africa’s transformation to democracy, this extraordinary conversation gave the first insight into the infamous prison for political opponents on Robben Island. The film was made under the State of Emergency in the film-director’s own home where three former political prisoners Neville Alexander, Fikile Bam & Kwedi Mkalipi describe how they, respectively, spent 10 & 20 years in the same section as Nelson Mandela and many other remarkable leaders, who were incarcerated there at the time. It is the first time they have met since they left. They explain how this imprisonment inadvertently helped build a solidarity & closeness between diverse political opposition groupings; how they survived emotional deprivation and lost self-pity and built a comradeship, resilience and knowledge of one another which helped cement the democratic foundations of South Africa’s democracy.
Date: 1988, Length: 55 mins 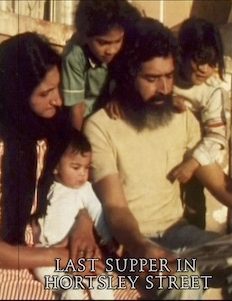 As in Nazi Germany, race-laws in South Africa under apartheid forcibly removed people from their homes. 60 000 people were removed from DISTRICT SIX in the heart of Cape Town, their homes razed to the ground, after it was declared to be for ‘white’ South Africans only. It took nearly 20 years to achieve and this film records one of the last families to leave in 1982. The Hendrickses, a Moslem family resisted until almost everything around them had been bulldozed into rubble. The film records their final removal and their subsequent placing in a remote new township miles from their place of work and the children’s schools. It is the only filmed record. It captures their philosophy, their faith in God, their hopes and fears and their subsequent hardships in the new place.
Date: 1983, Length: 48mins

CROSSROADS, an informal black settlement near Cape Town, was a site of resistance when husbands, wives & children refused to be separated by apartheid’s pass laws forcing them to live thousands of miles apart. They built houses and a remarkable community there and upheld family life threatened with destruction.
Date: 1978, Length: 35 mins